Rules and regulations are in place to accommodate people with special needs who require additional attention. When these are ignored in public, caregivers are understandably frustrated.

This was the case recently when an SBS Transit driver refused to let an autistic boy board a bus without a mask.

SBS Transit later apologized to the boy and his family for the incident.

The boy’s mother posted details of the incident to Complaint Singapore on Facebook on 7 January. 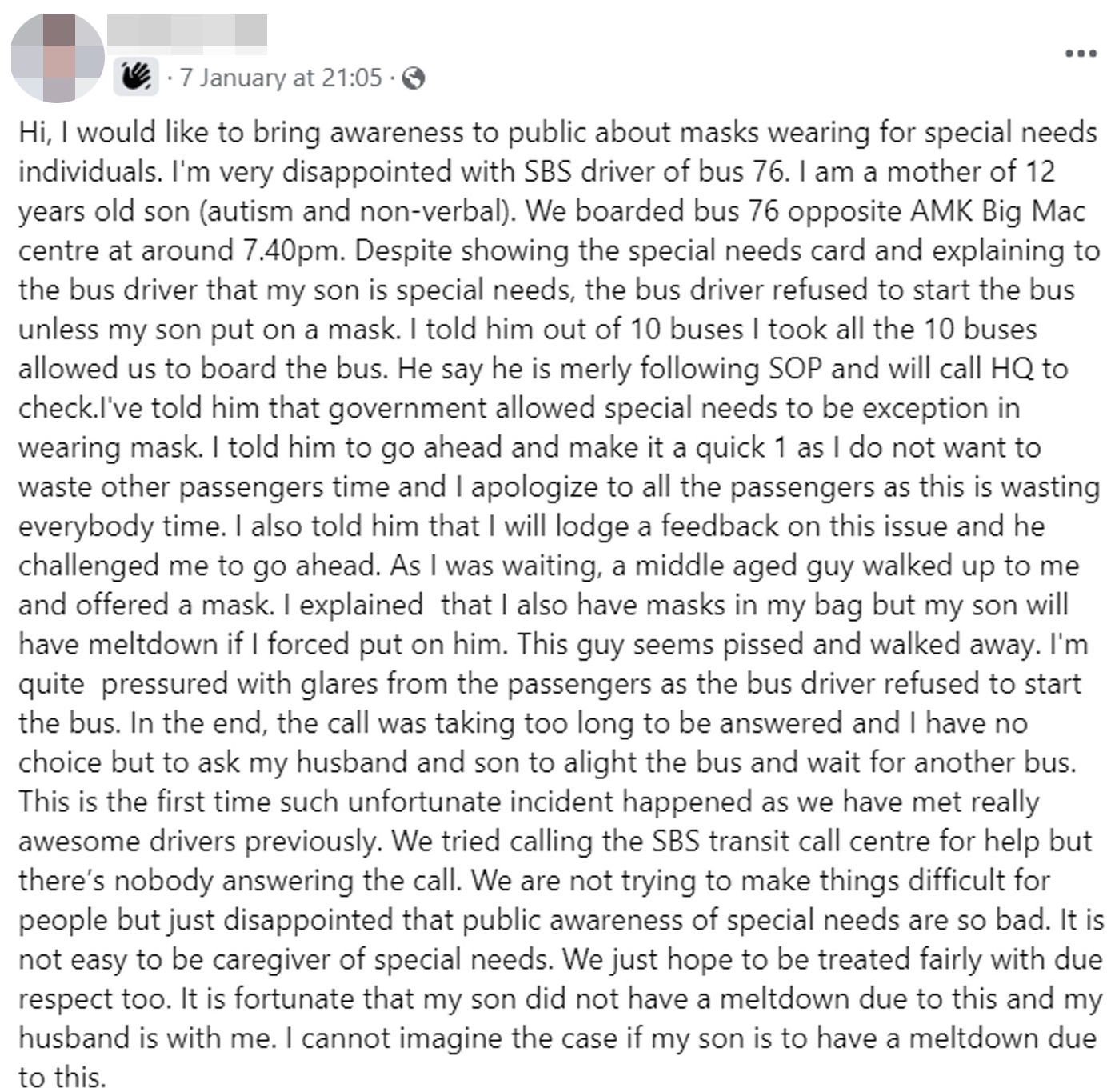 Her son is 12 years old and has autism and cannot speak. On the day of the incident, she boarded her No. 76 bus with her husband near Ang Mo Kio Central at around 7:40 pm.

Upon boarding, OP showed the driver his son’s special needs card. She also explained that he didn’t have to wear a mask on public transport because he was autistic.

However, the driver reportedly refused to start the car, claiming he was wearing a mask.

She then pointed out that of all the buses she rode, all were allowed to board while her son was not wearing a mask.

The driver replied that he was only following standard operating procedures (SOPs) and that he should call SBS Transit headquarters to confirm.

The OP told him to hurry up because he didn’t want to take up too much time with the other passengers.

“I also told him that I would submit feedback on this issue.

As she waited, a middle-aged man offered her a mask.

The OP declined the offer, stating that she already had a mask in her bag. Additionally, her son would have a meltdown if forced.

“The man seemed angry and walked away,” she continued. “I feel a lot of pressure because the bus driver refused to start the bus and the passengers stared at me.”

Ultimately, the call took too long, so OP opted to get off the bus with her husband and son and get on another bus.

“I’ve met some really great drivers before, so this is the first time such an unfortunate incident has happened,” lamented the OP. But no one answered the phone.”

She also called for greater public awareness about people with special needs. I hope you will.”

Health ministry guidelines say authorities will be flexible in enforcing mask-wearing for some groups, including children with special needs.

She explained that because mask-wearing is mandatory on public transport, the bus captain asked SBS Transit’s Operation Control Center (OCC) for confirmation and clarification before continuing the trip.

Unfortunately, OPC and his family got off the bus before OCC could respond positively.

“We will remind the bus captain of our guidelines so that we can better manage situations like this in the future.”