Phlegmonous Gastritis in a Patient With Nonalcoholic Steatohepatitis-Related Cirrhosis: A Case Report and Review of Literature

Phlegmonous gastritis is a nonspecific purulent inflammatory disease of the stomach that might involve only the submucosal layer or the full thickness of the stomach wall [1]. The risk factors for phlegmonous gastritis include alcohol abuse, diabetes mellitus, chronic gastritis, gastric ulcer, endoscopic treatments, and immunodeficient status [2]. The symptoms often include chills, fever, upper abdominal pain, nausea, and vomiting. However, the symptoms are sometimes mild, making diagnosis difficult.

A 60-year-old male had been treated for nonalcoholic steatohepatitis-related cirrhosis at an outside hospital accredited by the Japan Society of Hepatology. He could not receive a hepatic transplant due to obesity (body weight: 111 kg; body mass index: 39 kg/m2). One month before admission to our hospital, he developed Miller-Fisher syndrome as a complicating condition. He was transferred to our hospital for the treatment of cirrhosis and rehabilitation. He remained on the waiting list for the hepatic transplant, and we were in contact with the transplant department. He had been treated for portal vein thrombosis and hepatocellular carcinoma (using radiofrequency ablation) six years before starting this treatment. Physical examination at his current presentation showed grade 1 hepatic encephalopathy, jaundice, and splenomegaly. Laboratory findings on admission showed pancytopenia (white blood cell count {WBC}: 2.0×109/L; hemoglobin: 11.9 g/dL; platelets: 46×109/L), hypoproteinemia (total protein: 6.9 g/dL; albumin: 1.8 g/dL), liver dysfunction (total bilirubin {T-Bil}: 4.5 mg/dL; aspartate aminotransferase {AST}: 53 U/L; alanine aminotransferase: 17 U/L), hyperammonemia (212 μg/dL), and low prothrombin time (29.5%) (Table 1).

Table
1: Laboratory data of the patient.

This case was recognized as rapid progression of liver dysfunction in the last two weeks before death.

No antibodies against hepatitis B surface antigen, hepatitis B core antigen, or hepatitis C virus were detected. Child-Pugh class was C, Mac-2 binding protein glycosylation isomer was high (cutoff index: 17.95), and the indocyanine green retention rate at 15 min was 70.2%. Although protein concentration induced by vitamin K absence or antagonist II was high (786 mAU/mL), alpha-fetoprotein concentration was not (2.3 ng/dL). Both computed tomography (CT) and ultrasound revealed atrophic liver with a treated nodule, collateral vessels, ascites, and splenomegaly, but no gastric wall thickening (Figures 1a, 1b).

These findings did not change during this hospitalization. Esophagogastroduodenoscopy on hospital day 49 revealed chronic gastritis and grade A gastroesophageal reflux disease. The patient was treated with vonoprazan fumarate, ursodeoxycholic acid, levocarnitine chloride, branched-chain amino acid-enriched nutrients (Aminoleban EN; Otsuka Pharmaceutical Co., Tokyo, Japan), and spironolactone. No prominent changes in his clinical course were seen until clinical day 125. At this time, the patient experienced exacerbation of anorexia, but no fever, nausea, vomiting, epigastralgia, or diarrhea. His clouding of consciousness existed from the evening before death (The Glasgow Coma Scale {GCS} 9 points). His body temperature on the day of his death was 39.0°C. Sequential organ failure assessment (SOFA) score on the day of death was 11 points excluding one item (GCS=9, score 3; mean arterial pressure {MAP} 53 mmHg, score 1; PaO2/FiO2 not measured; platelets 53×109/L, score 2; bilirubin 22.8 mg/dL, score 4; and creatinine 1.34 mg/dL, score 1). Thus he might be septic.

In the stomach, the mucosa of the lesion was swollen and hemorrhagic, and histologic examination showed diffuse phlegmonous gastritis, characterized by infiltration of the entire thickness of the gastric wall with neutrophils and Gram-negative diplococci. The bacteria were considered as probably being endotoxin-producing Moraxella (Branhamella) catarrhalis (Figures 2a–2c).

Figure
2:
Microscopic view of the stomach.

In the liver, micronodular cirrhosis corresponding to steatohepatitis-related cirrhosis was obvious, and small nodular liver cirrhosis and hepatic atrophy were observed. Macrovesicular steatosis and ballooned hepatocytes could be observed. Accordingly, this was indicative of nonalcoholic steatohepatitis-related cirrhosis and due to this additional occurrence of sepsis-induced liver dysfunction, the biliary pathways were considered likely to have been damaged by endotoxin, resulting in the degeneration and subsequent proliferation of dilated canals of Hering near the portal vein. However, few pathological changes were evident in the lobular bile ducts. Further, numerous bile thrombi were seen congesting and proliferating the canals of Hering, with scattered neutrophils and lymphocytes, corresponding to sepsis- or endotoxin-related cholangitis lenta (Figures 3a, 3b). This was the probable cause of death in this patient. 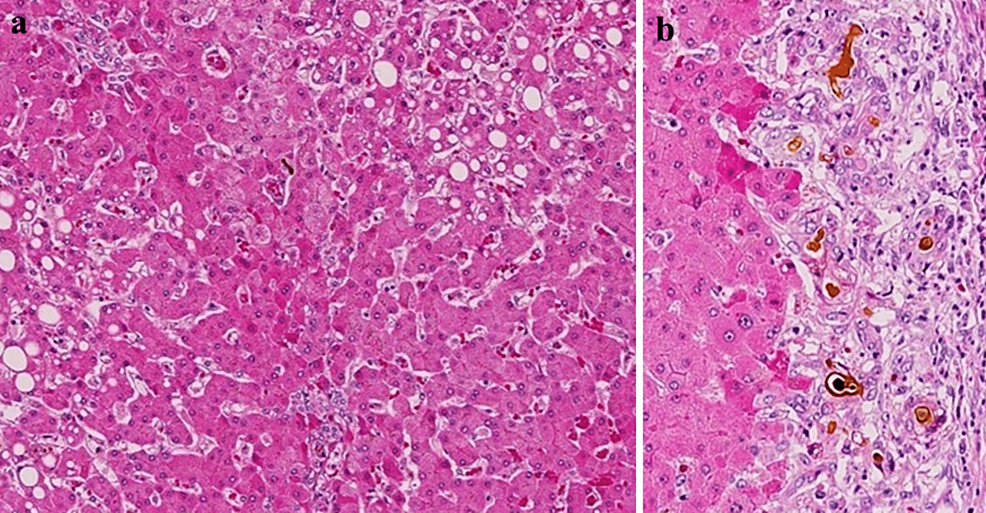 Figure
3:
Microscopic view of the liver.

The images show (a) nonalcoholic steatohepatitis-related liver cirrhosis (LC). Small nodular LC showing macrovesicular steatosis and injured, ballooned hepatic cells. (b) Histological analysis of cholangitis lenta showed proliferation and dilatation of the canals of Hering at the border of the portal vein, presence of bile thrombi, and infiltration of neutrophils and lymphocytes. Changes in the interlobular bile duct were scarce. (a) x40, (b) x200.

Phlegmonous gastritis can be caused by the following bacteria: Streptococcus, Staphylococcus aureus, Escherichia coli, Haemophilus influenzae, and Proteus species [10]. Phlegmonous gastritis caused by B. catarrhalis has never been previously reported. The mortality rate of phlegmonous gastritis is reportedly about 42% [11]. As B. catarrhalis is widely known to cause respiratory tract infection, a possible mode of infection, in this case, was direct gastric mucosal invasion after swallowing the pathogenic bacteria. Another possible reason for infection was lowered resistance due to malnutrition, since our patient with cirrhosis suffered from loss of appetite, leading to a compromise of the sterilizing ability of the stomach by acid secretion inhibitors. Moreover, this patient was immunocompromised due to decompensated cirrhosis [12].

On the other hand, the possibilities of translocated routes other than phlegmonous gastritis might exist. For example, this patient had cholangitis, which could be a bacterial translocation route. However, acute cholangitis by B. catarrhalis has never been reported previously. In histological examination, numerous bile thrombi, neutrophils, and lymphocytes were found to proliferate the canals of Hering, indicating the sepsis-related cholangitis lenta. Moreover, B. catarrhalis existed with neutrophils in all layers of the stomach. Thus, it was most likely that phlegmonous gastritis was orally developed, which caused sepsis and then cholangitis.

Table 2 summarizes two cases in the literature of phlegmonous gastritis associated with chronic hepatic disease in addition to the present case [8,9]. The underlying hepatic diseases were alcoholic liver disease and LC of unknown etiology. Both those patients were less than 60 years of age and had chronic liver disease that progressed rapidly and had a fatal course. However, each case was caused by a different bacterium.

Those patients were less than 60 years of age and had chronic liver disease that progressed rapidly and had a fatal course. However, each case was caused by a different bacterium.

Hence, phlegmonous gastritis should be recognized as a severe complication of chronic liver disease. Elevated T-Bil levels were previously reported as an indicator of poor prognosis in sepsis-induced liver dysfunction [17]. Additionally, γ-GT levels serve as an early marker of prognosis. Although our patient did not have fever or inflammatory findings, both T-Bil and γ-GT levels increased in the last two weeks before death. The reason why did both bilirubin and γ-GT levels increase might be that cholestasis persisted in the parenchyma and bile infarction occurred.

We have reported a rare autopsy case of nonalcoholic steatohepatitis-related cirrhosis that caused sepsis-induced liver dysfunction via phlegmonous gastritis. Phlegmonous gastritis should be recognized as an important complication of chronic liver disease, given the possible lack of specific symptoms and capacity for rapid progression.